In one of my final posts from my March visit to the La Jolla Map & Atlas Museum, I will show some of their large collection of pictorial maps. They just opened a new room dedicated to these maps including many by Jo Mora, an artist and photographer originally from Uruguay who moved to California, the subject of many of his pictorial maps.

More on the map above can be found in a previous post.

Another popular collection of pictorial maps is the "Hysetrical Map" series by the Lindgren Borthers.
This one is titled "A Hysterical Map Of The Mother Lode Where California Was Born and Hell Was Raised." It's full of jokey details such as "Gold is often found in sand but so is spinach" and "An ass covered with gold has more respect than a horse with a pack saddle." There are also maps of Yellowstone and the Grand Coulee Dam featured on the museum's web page.

A 1963 tourist map of southern California grandiosely titled "Ride the Roads to Romance along the Golden Coast thru the Sunshine Empire of Southern California" shows historic trails emanating out for Los Angeles City Hall,
to charming mountains, orange groves and historic missions.
The edges of the map show natural and historic vignettes.
Harrison Godwin's 1927 map of San Francisco ("where the sun never scorches and the water never freezes") is one of the most detailed pictorials packed with facts, figures, "whimsical vignettes" and transportation info. 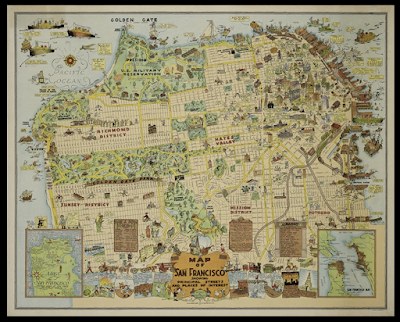 I was not able to get a good up close photo but here is a screen shot via the David Rumsey Map Collection. 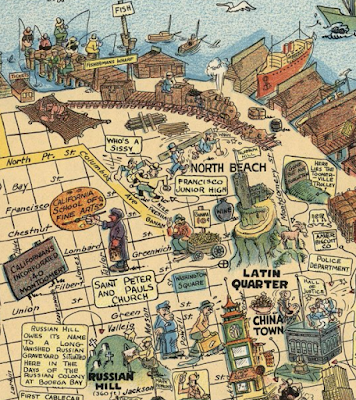 For a slightly more "modern" take here is the "Digital Deli Map of Personal Computer America" by illustrator Rick Meyerowitz, most famous for his work for National Lampoon. The map highlights Silicon Valley culture. 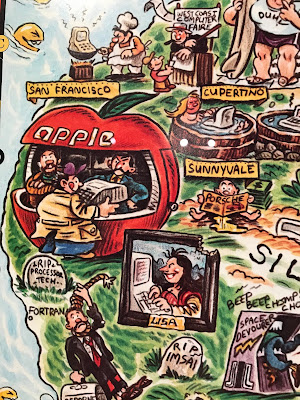 The bottom of the map contains a list of highlighted companies. 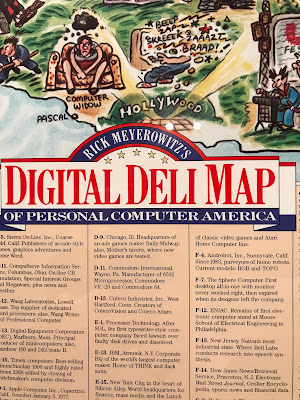 Highlights include a hiker in the Cascades carrying a large PC on his back with the screen reading "You are lost" and people in hot tubs looking at their computers. Here is part of the less important and therefore compressed eastern two thirds of the country. 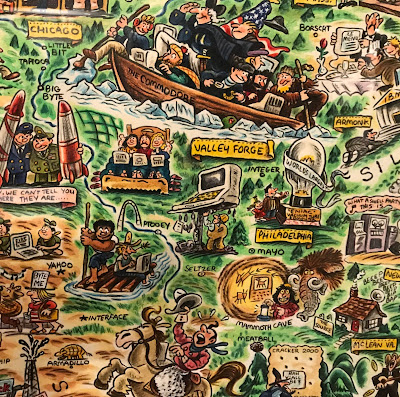