The Remarkable Maps of Mr. Tornado

Last night I watched "The Remarkable Mind of Mr. Tornado" on PBS. Tetsuya "Ted" Fujita was a pioneer in meteorology, known for developing the F-scale to measure tornadoes. His studies led him to draw many maps of this nature. 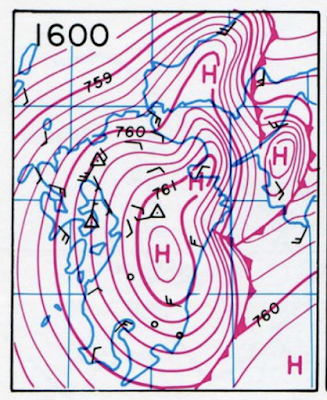 What I enjoyed the most was his personal maps. When he was invited to the University of Chicago to work with professor Horace Byers, he experienced his first airplane flight. During the flight he drew this charming map showing the clouds he passed through on a multi-day flight with two stopovers on Wake Island and in Hawaii.
This map is a bit hard to read at this size so here is some detail. Click the picture above to see the entire map at higher resolution. 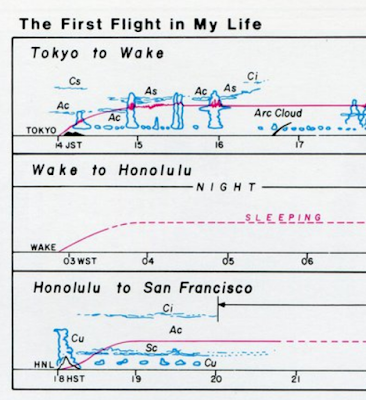 In his own words "Without wasting the expensive flight time, I began sketching the vertical time cross section of clouds along the flight path. Shortly before 1600 JST, the aircraft flew into towering cumuli, encountering severe turbulence. I heard crashing sounds of dishes and utensils in the flight kitchen. A moment after, the flight became smooth and I saw a beautiful arc of low clouds.”

After settling in Chicago he began to document his travel throughout the United States and Canada, first by railroad, then by car. 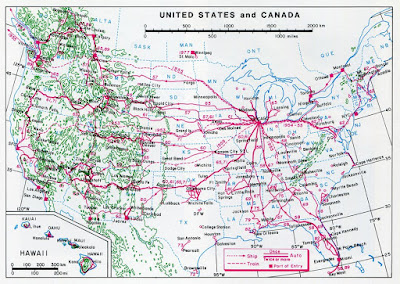 He traveled through every state except Rhode Island. According to the map he only missed it by a few miles. I have chronicled my own travels in this manner but not with nearly as much charm or detail.

Highlights of this map include the tornado-chasing squiggles through Oklahoma and the green elevation contours. 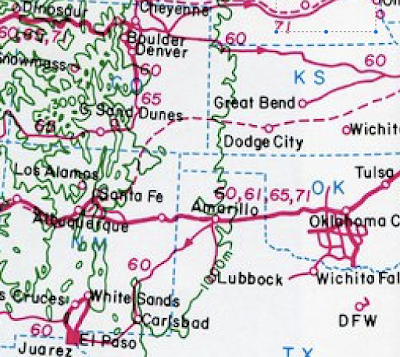