A year ago the COVID-19 pandemic made its first inroads into the United States. The virus was first found in Washington State in late January-early February. Science Magazine details the routes the virus took and includes this map. 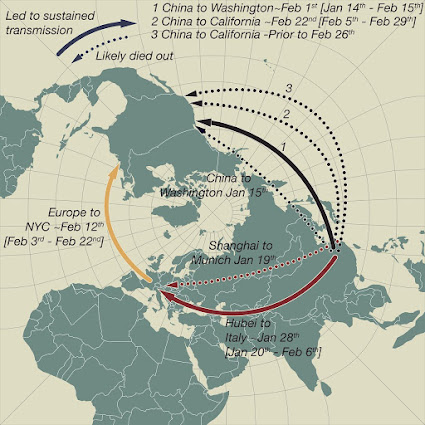 The article details how some of the earliest introductions in Washington were controlled by rapid interventions and social distancing. However, subsequent viruses appeared that were genetically similar making for "chains of cryptic transmission that started on 15 January and went undetected for several weeks."  The dashed lines indicate transmissions that died out. An early incursion to Munich, Germany is another example of a dead end. This variant was spread by an auto supplier who came to a company headquarters in Bavaria from Shanghai. The outbreak infected 16 employees but was contained through testing and isolation.

Eventually the virus made inroads in Washington and California by direct travel from China while another pathway brought the virus to New York via Italy. This lead to the earliest outbreaks, first in Seattle and then in New York City.