Another Office Tour of Scranton

My wife was passing through Scranton recently. Looking for a recommended tourist break, I found this Office tour. A few year ago I posted this downtown map. Here is a more regional view. 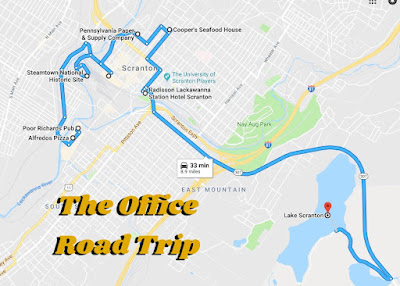 The map itself (via Auburn Artisan) is nothing special - just a Google Map tour. What is new (to me anyway) is that the restaurants and bars are real. I just assumed they made up these places like in most shows. The one place that not real* is the one you'd least expect, Chili's - the nearest one according to the post is in Wilkes-Barre**. While that is only a 30 minute drive away it seems kind of far to go for an office event.

* Probably Pizza by Alfredo (not to be confused with Alfredo's Pizza) with their "hot circle of garbage" is also a fake place.

**According the Chili's web site that location also no longer exists and the nearest one is in Bartonsville, over 40 miles away. Seems like an untapped market.

Just to complete your collection of "Office" themed maps there is this abomination, available on Etsy. 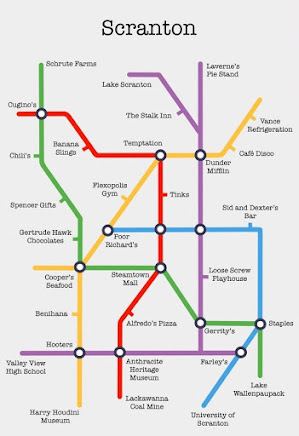 The subway metaphor does not work for everything. How many times was public transit ever mentioned on the show? This is a fine example of becksploitation. While you don't expect perfect geography on a transit map, they didn't even try here. The two lakes are NOT in opposite directions, the University should be in the middle and how about those two major stations in the middle that they couldn't even name? The Radisson is a major omission. Anyway if you like the show and don't care about any of this then enjoy!