Isolated Tribes of the Amazon

Indigenous advocate Bruno Pereira and journalist Dom Phillips were recently murdered on an expedition in the remote Javari (or Yavari) Valley in westernmost Brazil. They were studying and working to protect isolated indigenous tribes. These are tribes that do not want contact with the outside world. They are under threat from illegal fishermen, religious missionaries who want to convert them, dieases, drug trafficking, and the large scale destruction of the Amazon by agriculture and logging, along with a right wing government that is actively promoting those interests.  There are 28 conformed isolated tribes in Brazil, 10 in the Javari region, and possibly as many as 86 nationwide. 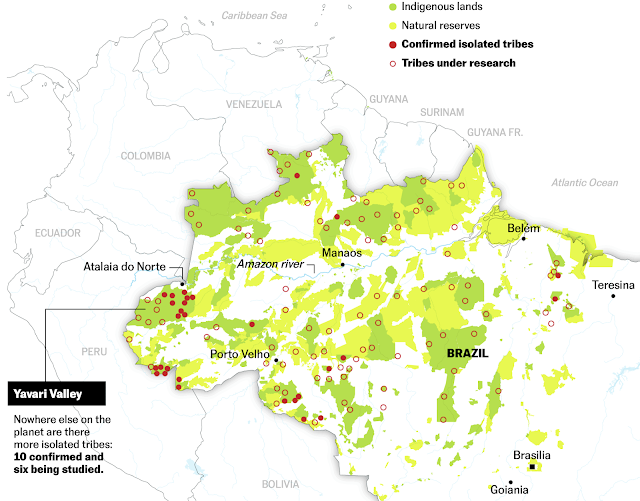 The above map is from El Pais. Due to some technical problems I can only shows the western half at a good enough resolution to be able to read the text. Here is the map's legend, 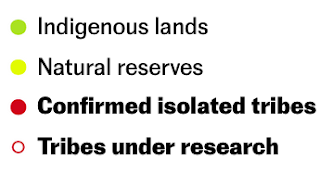 and the entire map at a less readable resolution. 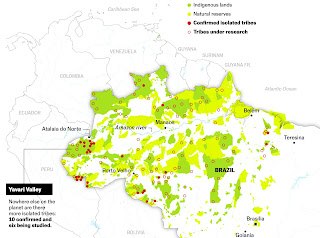 Pereira and Phillips were killed by a local fisherman on the Rio Itacoai while heading north to the town of Atalaia do Norte. A map from Uol News shows the area where they were last seen.

There is a good, detailed summary of the threats to these tribes in El Pais.
Posted by Dug at 6:49 AM

Location: Atalaia do Norte - AM, Brazil
Email ThisBlogThis!Share to TwitterShare to FacebookShare to Pinterest

Thanks for the map and the article, it was a fascinating read Dug!