The Disapperance of Native American Land

Native American losses began at first contact with European settlers. "European colonization of the Americas, which began in 1492, resulted in a precipitous decline in Native American population because of new diseases, wars, ethnic cleansing, and enslavement." - via Wikipedia

Native Americans had mostly been driven out of the original thirteen colonies by the end of the American Revolution. The map below shows further land cessations between 1789 and 1816 in the "northwest" region.

They were pushed even further westward into "strips of land stacked like cordwood" (quoted from Prairie Fires: The American Dreams of Laura Ingalls Wilder by Caroline Fraser p. 49). The designated Indian Territory (lands south of the Osages on the map below) was assigned to the "Five Civilized Tribes". 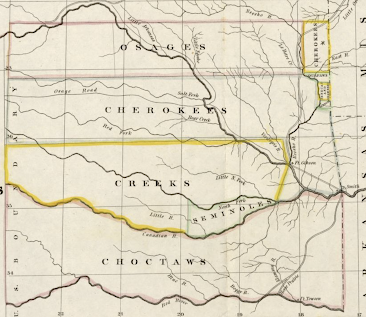 These tribes, the Cherokee, Chickasaw, Choctaw, Creek and Seminole were considered civilized because they had adopted Anglo-American practices such as Christianity, capitalism and in some cases the "civilized" practice of slavery. Despite being "civilized" they were still forced off their lands in the southeast and relocated westwards in the Trail of Tears.

The strip in southern Kansas was the Osage Diminished Reserve, an area left to them after signing many bad faith treaties. The rivers of their former land still bear the tribe's name. 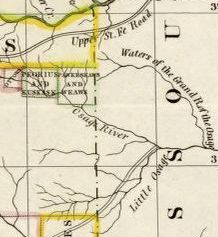 Even after being removed from the rest of their land and granted this area of Kansas, it too became overrun with white squatters. These people included Charles Ingalls, father of Laura Ingalls Wilder. They settled on land they did not own and eventually drove the Osage out of Kansas entirely, forcing them to also relocate to Indian Territory. The tribe's base is now in northeastern Oklahoma.

Here is the full map above showing the lands assigned to "emigrant Indians" west of Arkansas and Missouri. 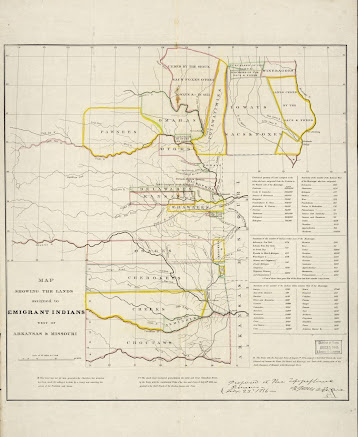 The Chickasaw after a long dispute paid the Choctaw for the westernmost part of their land. 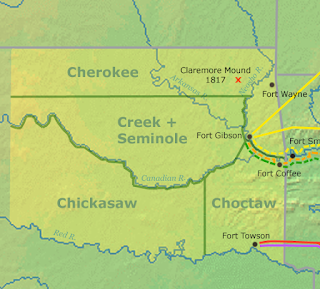 This map via Wikipedia illustrates the Trail of Tears beginning in the 1830's. Some Cherokee had settled in northeastern Texas where they signed a treaty with Texas Republic President Sam Houston. In 1839 his successor backtracked on this treaty and sent militia to forcibly relocate them to Indian Territory. Here is a map of their final battle in Van Zandt County, via the Oklahoma Historical Society. 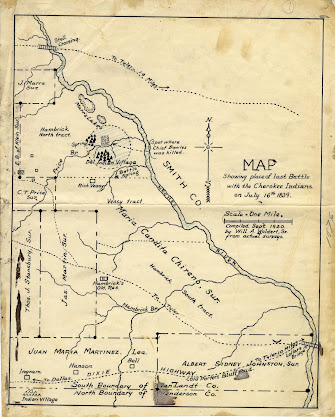 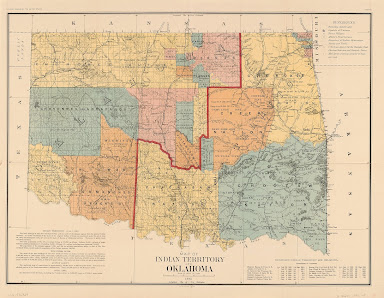 Both territories sought statehood but in response to concerns from eastern politicians about creating two new western states they were combined into one state, Oklahoma, in 1907. Congress sought to dissolve the reservations as part of Oklahoma's statehood but the laws were vague and unevenly applied and has led to decades of uncertainty. In 2020 The Supreme Court of the United States, in the case of McGirt v. Oklahoma determined that much of the eastern part of the state remains Native American land. Though this case was primarily about jurisdiction of criminal cases, it has opened up questions about ownership, taxation, zoning and the enforcement of environmental policies.

A 1914 map submitted as part of the McGirt case shows the entire area that was post-1890 Indian Territory as Indian Reservations,

making this by far the largest tract of Native American land in the country. 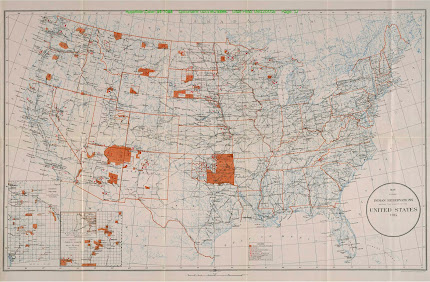 The future of this land will be determined through extensive negotiations between the tribes and state and federal authorities. For a deep dive into the Supreme Court's ruling see Indianz.com