More maps, because I just can’t stop myself. 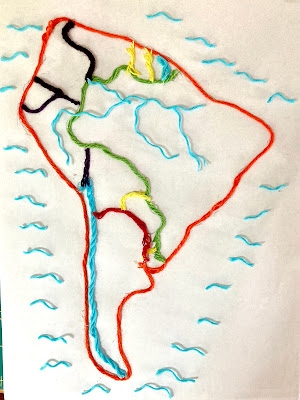 A yarn map of South America. Some of the yarn was glued to paper. The glue didn’t always go where I wanted so Paraguay got mushed. The Amazon and its tributaries were laid on top without glue. 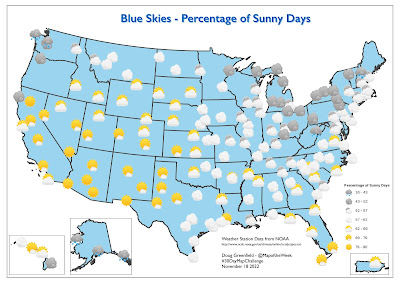 After seeing an article in the newspaper about sunny vs cloudy cities, I dug into the NOAA web site and got the major weather stations with their coordinates and percentage of sunny days.

I was feeling unsatisfied with my Day 15 (food and drink) map of wine regions (here it is again) because it only shows one of the many good wine regions in the world. 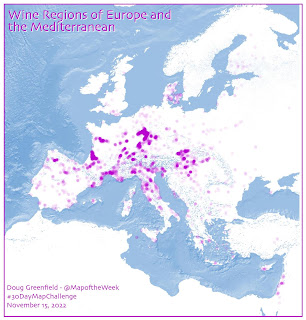 Here is a more “global” view. 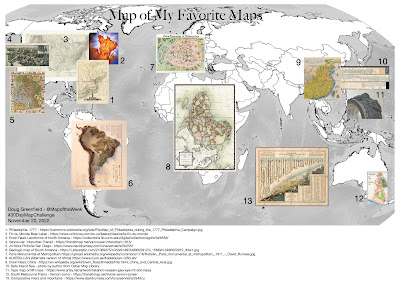 A map of my favorite maps. This idea was good in theory, less so in practice. It’s almost impossible to see what’s going on here without blowing this way up and reading the tiny text at the bottom. I have many other “favorite” maps but these were chosen for their geographic spread. 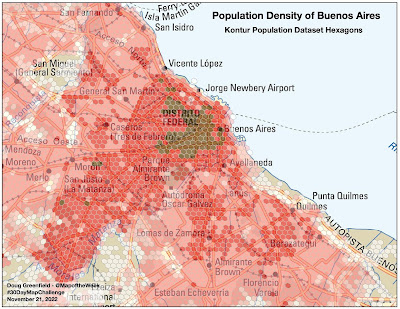 Like probably most people, I did not know anything about this dataset until the morning if the 21st. As far as I can tell it’s just population counts, no other demographic information, so most of the maps for this day were density maps. This dataset is huge and was killing my poor computer so I grabbed a small area to make it manageable. South America was the first place that drew so that why I chose Buenos Aires. 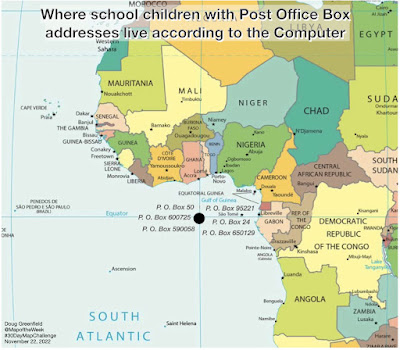 Null Island in geographer lore is an island in the Gulf of Guinea (there’s no island there) where latitude 0 meets longitude 0. You may see maps with points mysteriously showing up here because the data has null coordinates. I get this kind of thing regularly at my job when we map school children for size projections, busing and redistricting. Almost every list I get has at least one if not many post office box addresses so the coordinates are NULL. I could just say they live at the Post Office and that would be more accurate than the Gulf of Guinea but that requires extra work and would still be wrong.

For the busiest day of Thanksgiving travel, here are travel paths as millions criss-cross the country. I got the top 30 metro areas but after I was done I noticed that New York City somehow got removed. It wasn’t intentional, really! 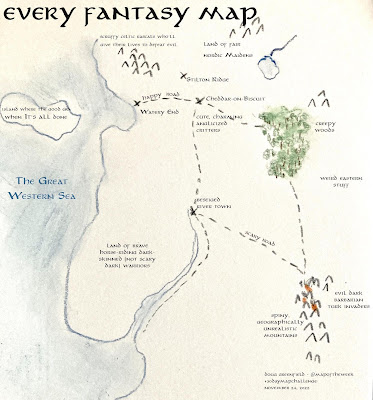